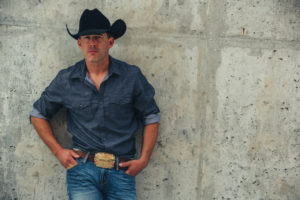 In the world of Texas Country Music, there are several artists in the industry who have roots in West Texas. In this month’s Behind the Music feature, we sit down with Aaron Watson to get an inside look of life outside of touring, find out what he and his family are up to, and much more.

In our first topic of discussion, we wanted to nd out what life was like for Watson outside of concerts and touring, and he said, “It’s not that I don’t enjoy touring, but I would say when I’m not touring, I’m actually just living life.”

“Living life for me is being at home with my wife and kids, taking Jolee Kate to her ballet practice, taking the boys to their baseball practice, just be- ing a dad,” he said.

“I’m about as normal and average as a guy can be; when I’m home I’m just doing those honey-do’s, yard work, feeding the horses, chickens, driving the old Jeep around, going to the ranch, just stuff like that.”

We wanted to know a little bit about Watson during the early stages of songwriting and asked him to give us some insight, and he said, “I’ll tell you, at the very beginning, a lot of them were just more poems, more like cowboy poetry than they were songs.”

“I will tell you this,” he said, “the very first waltz that I wrote was actually called Lonely Lubbock Lights.”

“I wrote that song about the feeling that I felt driving home from Amarillo to Abilene, going through Lubbock, and not stopping to see her. It was kind of like those lonely Lubbock lights, they were kind of haunting,” he said.

“ That feeling yielded a song so I guess it wasn’t a big lost cause.”

After taking a glance into his songwriting, we wanted to chat with Watson about the time he realized music was going to be his career.

We asked when that moment was when he re- alized music was going to be his career, and
he said, “You know, my college baseball career zzled quickly with an injury, and up till that point I was just focused on school and baseball and it was a real eye opener for me wondering what I was going to do next.”

“ The Texas scene has always been around going back to Willie and Wayland, but it really had this resurgence with guys like Pat Green and Corey Morrow, and my buddies and I would make trips to Lubbock to see Pat and Corey, so I was kind of in the forefront in that new phase of Texas Country Music,” he said.

“The next thing you know, I’m getting to open shows for Pat and Corey, so I knew that’s what I wanted to do.”

Fast-forward many years of concerts and tour- ing along with sky rocketing album sales, and we wanted to know something unique about Mr. Watson.

In our next question, we wanted Watson to tell the Campus Live audience something most people wouldn’t know about him.

After a few seconds of thinking, he said, “Let me see, something you don’t know about me, I’ve got pretty good dance moves!”

“But, some things are meant to just stay behind closed doors,” he said.

“When my little girl, Jolee Kate, puts on her Taylor Swift or The Greatest Showman soundtrack, she and I will break out the dance moves.”

Finally, we wanted to get an inside glance on Watson’s thoughts on the success of his latest al- bum, Vaquero.

We asked Watson what he thought personally about the album and the heights it reached, and he said, “It’s just been such a blessing, you know, six years ago our album ‘Real Good Time’ charted Top 10 on Billboard, and then the ‘The Underdog’ charted No. 1 and became the rst independent album to chart No. 1.”

“It was just really important that my next album stay true to who I am and what I’ve been doing for the last twenty years,” he said.

“These kids in Texas have been supporting me faithfully and I needed to just show them that I’m in this for the long haul and I’m not selling out.”

He went on to elaborate on staying true to his self when describing the Vaquero alum.

“If you bought Vaquero you can see that Vaquero actually means Cowboy, there’s a Texas ag on the cover, and the first song on the album is called Texas Lullaby,” he said.

“I think it’s important for people who are fans of Texas Music to know that I’m letting the whole world know that I am unapologetically Texan and I’m proud to be part of the Texas music scene.”

“It’s what has taken care of me and my family for a long time. It’s in my blood and I don’t want to be anything other,” he said.

“We were playing a big festival in California one time and they brought me on-stage and announced me as a Nashville recording artist. I stopped the whole show and said ‘actually, we’re from Texas.’”

Behind the Music with Josh Abbott

Behind the Music with Cory Morrow