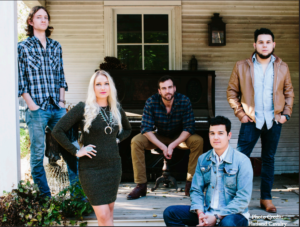 Lubbock has produced several big acts in the Texas Country Music scene. In this month’s Behind the Music feature, we had the honor of speaking with Cleto Cordero, the front man of West Texas’ own, Flatland Cavalry.

In our interview with Cleto, we got the scoop on new music coming up from the band. Campus Live found out about how he discovered his passion for music, learned about their new single, and much more.

“We’re currently working on our next, full length, album. We’re recording at Amusement Park Studios in Lubbock, Texas, with Scott Farris as our producer. We’re trying to get that album out before the end of the year,” Cordero said.

We found out the band will most like have their new single out before 4th of July, with Cordero describing it as, “an upbeat love song written in summer time.”

When we spoke with Cordero, Flatland Cavalry had just performed at Billy Bob’s in Fort Worth, Texas, and had a performance in Austin the next day with several more shows lined up. “We’re currently on the road constantly and have a north west run coming up with shows in Montana, Seattle, Idaho, and Colorado, along with hitting the studio working on the new album,” he said.

Our next topic of conversation focused on the creation of new music. We wanted to know how the band typically sits down to write and create their songs. “It started out originally with me having a bunch of songs, then I found some band members. We were a cover band, and it just naturally flowed together with me being a songwriter and them adding their parts to it,” Cordero said.

“That’s still the majority of the way it still works now, but on this new record me and the guitar player, Reed, we wrote a song together. It just organically happened, but in a nutshell, I usually bring the songs to the group and they add their own little flare to it.”

We asked the band’s front man who he would like to collaborate with if ever given the opportunity. Taken for words by this question, we learned that his dream collaboration would be with Robert Earl Keen. While Cordero expressed his desire of collaboration, he also said we would probably have a variety of answers if each band member had the opportunity to choose.

“You’d probably get five different answers if you asked everyone in the band, but I think working with some of the older guys in the industry would be really cool just to be able to pick their brains and see how they did it or would go about it,” he said.

Cordero discovered his passion in music at an early age growing up stealing his older brother’s CDs to listen to music and jot down the words to different songs. He knew he had a desire for music growing up, but it was actually a particular moment in his teenage years when he discovered music was for him.

“I went to a Randy Rogers concert when I was seventeen,” he said. “I was just blown away. I really love Randy, and he just shows his spirit on stage and loves the audience, right then and there, I knew exactly what I wanted to do.”

From a West Texas kid whose first job ever was at Whataburger, to being the lead singer and chief song writer for Flatland Cavalry, we asked Cordero to describe each member of his band in one word.

Taken by laughter, he said, “I would call our drummer and bass player goofy, our guitar player would be pensive, and Laura would be sassy.”

In our final minutes, Cordero spoke about the love Flatland Cavalry has for their music, their fans, and the desire to connect the two. We wanted to know what made Flatland Cavalry unique, and he said, “I think just the songs and the style, you can’t really put your thumb quite on it. Some of the songs are more country and some of them have the groove thing to it.”

“I would just say honestly it’s the songs and the desire to want to connect with people.”

Behind the Music: Meet TexWestus

Behind the Music- William Clark Green