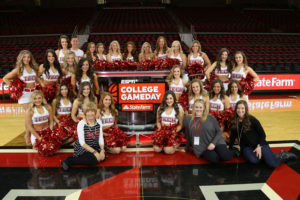 You see the Texas Tech Pom Squad on game day, in the community, and most recently, in the national spotlight. Campus Live had the chance to track down our national championship Head Pom Coach, Erin Harold-Alvarado, along with Spirit Program Director, Stephanie Rhode, to get an inside look at Texas Tech Pom.

Coming off back-to-back national championships, we sat down to learn more about the spirit director and her head coach, find out what a day-to-day is like in the spirit program, hear their thoughts on winning a national title, and much more.

We asked Rhode of how she found her way to her current position with the Texas Tech Spirit Program. Originally from Memphis, Tennessee, Rhode said, “I am the poster child for following your bliss, I really am. I grew up not dancing or doing gymnastics but I loved all those things.”

“Consequently, I always followed those things and, as an adult, I got involved in those things in the ways that I could for not having been a dancer,” she said.

Finding her way from Memphis to Lubbock, Rhode told us the story of how her husband, who grew up in Lubbock, played a large part in making Texas her home for the past 30 years.

“I grew up in Memphis, Tennessee, for most of my life and my husband took a job here after having grown up here. He was a college professor in Memphis and his family had a business here, so we took a leap of faith

to move to Lubbock and have been here for 30 years now,” Rhode said.

Head Coach, Erin Harold-Alvarado, also not a native of Texas, found her way to TTU Pom by way of dancing for her alma mater, e University of West Virginia.

“After I danced at West Virginia, I became the coach at West Virginia, then I worked for National Dance Alliance which is who we compete with now, and that’s ultimately how I heard about the position,” Harold-Alvarado said.

“I applied thinking that I’d never get the job but came out here and interviewed the longest interview of my entire life. It was like a twelve-hour day interviewing with every single person on this campus, and six years later, here I am,” she said.

Our next topic focused on day-to-day life around the spirit program. Coach Harold-Alvarado told us of the year-round schedule most don’t typically see.

“For me, it really depends on the day, the week, or the month as this is a 365 day a year commitment,” Har- old-Alvarado said.

“Between sports, competing, spring game, end of the year banquet, tryouts, getting ready for football in the fall, working normal business hours along with practice at night’s, and teaching dance classes here on campus, I don’t think people necessarily understand the amount of time that we’re putting in,” she said.

“It’s kind of ever-evolving. Our days on average are usually from 9 am to 10 pm, but I’m not complaining because I love all of it,” she said.

Next, we asked the head coach how it felt to have back-to-back national championships under her belt, and she said, “It has been such a whirlwind, this has been one of the fastest years for us.”

“The back-to-back part has been a goal for us since the day we made this team last year. I think that every team who wins once wants to prove that they can do it again,” she said. “Our season was not completed for us until we won both Jazz and Pom, which is what we said we were going to do.”

We asked Rhode her thoughts on winning back-to-back championships as well, and her thoughts mirrored the head coach.

“I feel great,” she said. “I don’t want to sound cocky at all, but one of the things Erin and I have in common is that this is what we expected and what we trained to do. I think we set our program up for excellence just in the way we do everything from academics, our service to the University, to game day, and to Nationals.”

“I always tell our students that I was us to be a symbol of something great, so it felt like an affirmation that we are on the right track for what we want to do but I’m ready to move forward and do it again,” Rhode said.

Our time with the leadership of Texas Tech Pom was wonderful. We learned in our interview with Rhode and Harold-Alvarado that a team is truly a reflection of its leadership. For Texas Tech Pom, we’ve got a winner.

Fitness: 4 tips to keep your summer bod on track