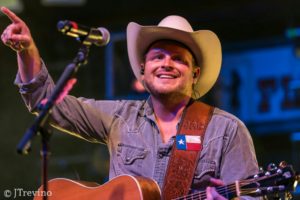 Texas Country Music artist, Josh Abbott, took time to chat with Campus Live in this months Behind the Music edition. We sat down with the Texas Tech Alumni and West Texas Native to dig into his West Texas roots, learn about his start in Texas Country Music, and find out what he and his family are up to now.

In our first topic of conversation, we wanted to know what his thoughts were on growing up in West Texas.

“You know, at the time it’s the only thing you know, just like everybody that grows up wherever they’re from,” Abbot said.

“I think as you get older, years later, when you move perhaps, and travel the country and world, you start to really look back on your time growing up and realize the unique aspects of where you lived.”

Abbott currently resides in Austin, TX, and reflected on his time growing up in the Panhandle.

“Being older now and living in Austin and looking back, I can appreciate certain things about growing up in West Texas, and there’s obviously some things looking back that were probably lacking, but still the best people I usually tend to meet are from the Panhandle and West Texas,” Abbott said.

Abbott also spoke about things he appreciated in West Texas, such as the economy.

“I appreciate the economy back in West Texas, you know, obviously at the time you think it’s just a normal way of life but, looking back, I have a new appreciation for the number of farmers and the hard work they do to make money and provide a commodity for our country,” Abbott said.

In speaking about his time in high school, Abbott spoke about some of the people who helped shape and mentor him.

“A big part of what shapes you are the people who mentor you and educate you during your teenage years, so for me, to have had the collection of teachers and coaches that I had, especially at Idalou, I have no doubt that they were a huge impact on the way that I was able to develop certain skills that lead me to be successful in college,” Abbott said.

Our next topic of conversation shifted towards his start in music and what inspired Abbott to start writing music.

“I was playing guitar in college, did some praise and worship stuff, and played a lot of covers when I was in college in Phi Delta Theta specifically, and eventually my amount of nights at The Blue Light finally shaped me because I think going there and watching guys like Wade Bowen and Randy Rogers play up there, and really seeing the fandom and passion first hand, I just decided I wanted to start writing songs,” Abbott said.

“I felt like I was a pretty good wordsmith, I was always good at speaking and drafting speeches, so figured I’d be ok at writing.”

Abbott detailed the art of songwriting and gave Campus Live his thoughts on the continued growth it takes.

“I think looking back, especially years later, I am still working on it and have been writing songs for probably thirteen or fourteen years now, so I didn’t start writing songs till I was about twenty-three or twenty-four, and I’m now thirty-seven, so I still have a long way to go to be honest because you’re always learning and evolving,” he said.

When asked about some of his favorite songs he’s written, Abbott said, “I think a few jump out, on the newest record there’s a title track called ‘Until My Voice Goes Out’ that means a lot to me, looking at it from a rhetorical standpoint, I think it’s a well written and inspirational take on what life is meant to be.”

“Another song on the new record I’m proud of is called ‘I’m Your Only Flaw’ which is a song I wrote about my fiancé, I wrote the very first verse as just poetry and then ended up turning it into a song months later, so that to me felt really organic.”

Looking at previous records, some of the original fan favorites were also mentioned amongst the top of the list.

“I’m still really proud of ‘Oh Tonight’ because I wrote that song when I was in college at Tech and it was one of the very first songs I ever wrote back in 2005 and we didn’t even end up recording it until 2010.”

We also wanted to know of any funny stories Abbott had in regards to getting his start in Texas Country Music, and he said, “You know, cutting our teeth over at e Blue Light, a lot of fun memories from load-ins and playing gigs, and late nights, which helped shape my career.”

“Playing Calf Fry for my fraternity when I was in grad school was a really cool moment for me, just being able to play in an event that I had gone to for so many years,” Abbott said.

We then shifted focus to any advice Abbott may have for any local artists who are looking to get their start in the industry.

“I would say write your own songs because that’s truly a way you’re going to get better,” Abbott said.

“If you’re not writing and singing your own songs at open-mic nights and trying to get gigs at e Blue Light, and if you’re dependent on the popularity of covers, that’s very normal for young bands, but the only way you’re going to get better faster is to write your own songs and believe in them.”

Abbott’s advice to aspiring Texas Country Music artists encouraged them to be true to their selves.

“If you listen to Texas Country, you know that there are so many different sounds, just how Whiskey Meyers sound nothing like Aaron Watson, so I there’s a lot of ways to sound the way you want to sound so I would just go with that because what matters at the end of the day is that you love what you do,” Abbott said.

In speaking of up and coming artists, we wanted to know who Abbott was currently listening to and whom he thought might be the next big thing.

“That’s all subjective, but obviously I’m partial to some West Texas guys like Flatland Calvary, they only have one album and an EP that they put out before that, but essentially they’re recording their sophomore album now and I think that will be a huge moment for them hopefully,” Abbott said.

“I think Randall King and Hunter Hutchinson are other names to keep your eye on, both really talented guys who have cut their teeth at e Blue Light from the West Texas area, so I think these are guys you’ll start seeing develop a fan base, put out some good albums, and really put the cowboy back in country.”

In regards to what he’s listening to, Abbott said, “Some of my favorite records from last year were Turnpike Troubadours, Tyler Childers who is a guy from West Virginia that I really enjoyed, Wade Bowen also put out a record that was fantastic, and I think he really lead the path for a lot of us out in Lubbock.”

In our final topic of conversation, we wanted to know what we could n Abbott doing outside of concerts and touring.

“You know, outside of touring, life’s still very complex, touring keeps me busy but on the off days, I’ve got a fiancé and a daughter and we’ve got a beautiful life and try to spend as much time together,” Abbott said.

“There’s also the ends and outs of running a business so there are lots of phone calls with agents and managers, PR people, my accountant, so really just talk with everyone each week and try to get caught up on business a airs to make sure everything is running smoothly, all while finding time to write.”

Music isn’t the only things Abbott pursues as we also learned of a side business in the apparel and clothing industry.

“I’m a part owner of Sideline Swagger, an apparel & clothing company that has really focused on Texas Tech initially, and we’ll probably branch out to a couple more Universities this next year, and I’m also a part of Mac’s BBQ restaurant, so usually my week is filled with phone calls and emails to make sure the ship is being sailed in the right direction.”

To stay plugged in with Josh Abbott, make sure to follow them at the info below 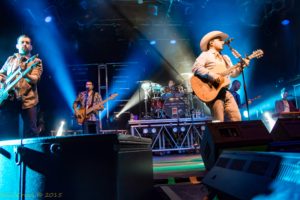 Behind the Music – Lea Fulton

Behind the Music – Aaron Watson