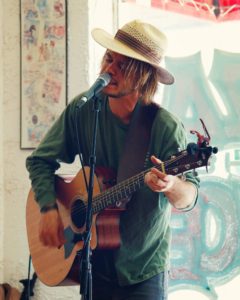 MEET LEA FULTON, A TTU GRAD STUDENT WITH A PASSION FOR MUSIC

Lea Fulton has become a familiar face around town since opening for Hunter Hayes at the Spring Concert and playing gigs in Lubbock. As a recent Texas Tech alumnus, Fulton is continuing his education at Texas Tech for graduate school in the fall and is excited to see where music takes him.

What is an early memory you have of music?

The first memory I have of being interested in music was when I was listening to “Who Let the Dogs Out” by the Baha Men, and I was just really grooving to it. Then, listening to Avril Lavigne, as well. These are just really old memories of the first few songs I enjoyed.

My dad – he was really big on music. My mom also loved music. Both of them were always playing in the house. They have videos of me dancing to like Black Sabbath. My dad raised me on classic rock. I grew up moving around overseas, so I wasn’t really a part of the popular culture of American music.

When did you start having an interest in music?

My dad always played guitar, and then he bought me my first guitar in sixth grade. I was really excited about it and started fiddling around with it. From there,
I started getting a little bit better. When I came to college, I met a guy who wrote his own songs. I, at the time, had just played covers. He said it was all about writing songs, so I tried that. After I wrote my first song, I liked it. I’ve been writing songs ever since.

What would you describe your genre of music as?

The songs I write are mixtures: singer-songwriter, folky, reggae, classic rock, and alternative rock. If I were to mesh it all into one, I’d say I’m leaning more toward pop music. Pop music is popular music for a reason. I want to write music that reaches out to as many people as possible in a positive way.

What has been your favorite moments performing?

I put on a show for the first time as a celebration for getting accepted into grad school. Typically, I’ll play a gig, and for a lot of gigs in Lubbock, the musician is kind of a fly on the wall and background music. I was able to get openers for me. I had all these things ramping up the climax of when I went on. That was a really beautiful moment for me. I think any moment where the audience is really engaged is what I thrive off of. It’s cool for me to play for an audience who enjoys what I’m doing.

How do you think music benefits your life?

In so many ways! Connecting with other people – I could meet someone for the first time and immediately hit it off with them by talking about a Beatles song we both like. It’s kind of like a language that’s universal. Music has also helped create opportunities for myself to get out of my comfort zone. It’s helped me grow.

Where do see yourself in 10 years?

The short answer is I don’t know. I have no clue. I think it’s a good thing I don’t know because if I did, that’d be kind of boring. I’m not as focused today on if music will be a big part of my life because I think I just know that it will be. It’s just what I love to do. It’s truly my passion. I believe in the deepest part of my heart and my soul that I’m meant to perform and be on stage. 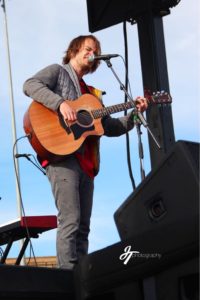 Behind the Music: Jenni Dale Lord

Behind the Music: Meet TexWestus