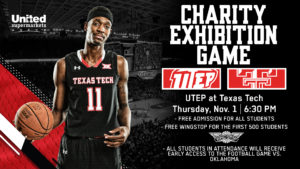 The exhibition game is not part of the 2018-19 season ticket package and is $10 general admission, while Texas Tech students receive free admission. Parking will not be reserved and is available on a first come first serve basis. Tickets for this charity exhibition can be purchased at the Texas Tech Ticket Office, on texastech.com or by calling 806-742-TECH. The first 500 students will also receive free Wing Stop before the game.

The Red Raiders and Miners will be meeting for the first time since 2010 and for the 63rd time overall. Texas Tech, which officially opens its season against Incarnate Word on Tuesday, Nov. 6 in Lubbock, leads the all-time series against the Miners by a 43-19 margin with the teams first playing each other in 1931. The Red Raiders earned a 33-31 win on Jan. 9, 1931 and before a 26-24 victory a day later on Jan. 10, 1931 under head coach W.L. Golightly. The Red Raiders are coming off a historic season where they advanced to the NCAA Elite Eight for the first time in program history, while the Miners were 11-20 last year.

“It’ll be the first time to see the team play against a really good UTEP team that is projected to have a good season,” Texas Tech head coach Chris Beard said. “They have some really good players. This gives us a unique opportunity to play in front of our fans against a Division I opponent and help a great cause.”

The Santa Fe Strong Fund is set up to financially support the families of those killed and injured in the horrific tragedy at Santa Fe High School on May 18, 2018. The National Compassion Fund was founded in collaboration with parents and family members from some of the worst mass casualty events in U.S. history – September 11th, Columbine, Virginia Tech, Northern Illinois University, Aurora, Oak Creek Sikh Temple and Newtown. Unlike other charitable funds, 100% of donations are distributed directly to the established victim base of these terrible atrocities.

Texas Tech and UTEP are joining college campuses across the country who are raising funds to support communities recovering from disastrous events. These efforts to contribute money to charities supporting wildfire recovery, hurricane relief, and memorial funds are done within NCAA rules and with the guidance established by committees comprised of NCAA member schools.

To provide a safer environment for the public and significantly expedite guest entry into our venues, Texas Tech Athletics’ a clear bag policy will be in effect for this event.

Texas Tech will host Incarnate Word in its season-opener at 6:30 p.m. on Tuesday at the United Supermarkets Arena in the first of three home games to begin the 2018-19 season. The Red Raiders will also host Mississippi Valley State on Friday, Nov. 9 and Southeastern Louisiana on Tuesday, Nov. 13 before traveling to Kansas City to play in the Hall of Fame Classic in mid-November

***This article was a press release from Texas Tech Athletics Communications***

Let’s Hang – things to do in LBK

TTU Drops Homecoming to TCU: Now 4-2 for the Season