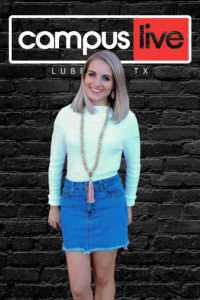 As Abbie Raef walked onto the football field on Oct. 20, 2018, for the game against Kansas, she had no idea halftime would end with a crown on her head.

Campus Live chatted with Tech’s 2018 Homecoming Queen about her love of Tech and Alpha Chi Omega.

While attending a small private school in Amaril- lo, Raef swore she would never attend college at Tech since it was so close to home. Her mom took her to tour Tech and promised to never mention the school again if Raef just gave it a chance.

“I went on a campus tour, and as much as I did not want to admit to myself or my mom, I ended up loving Texas Tech,” she said. “Ultimately, all the amount of opportunities that I had the potential to be able to get involved with is really what sealed the deal to Texas Tech.”

As the beauty, programs, and opportunities caught her eye, Raef decided on Tech over all the colleges she was accepted to.

“It’s been a really incredible time,” she said, “and I’m so thankful everything worked out the way it did because Texas Tech has been the greatest experience of my life.”

As a senior in high school, Raef was uncertain
on her major but knew she had a strong love for Latin. Once she decided on a major in classics, Raef explained she felt it fit into medical school in a unique way.

“Having that humanities and classics background really is what pushed me toward medicine because it showed me the more personal side of medicine,” Raef said. “Medicine is about science, but it’s also about people.”

From growing up knowing she wanted to do something in the medical field, it was not
until her roommate went through a traumatic accident before Raef decided on surgery. Hold- ing someone you love so dearly possibly dying right in front of you is an experience Raef revealed as intimate and scary.

“I really want to go into the medical field because I understand how personal that moment is,” she said, “and I want to make sure people feel comfortable in that moment dealing with all kinds of humanness that comes with the medicine.”

As a graduate for May 2019, Raef has already applied to all the medical school in Texas, but she mentioned Tech is her number one choice.

As the only student from her high school to attend Tech, Raef acknowledged she decided to join a sorority because she wanted to make friends and build connections. Even though she did not know what to expect, Raef decided to take a leap and went through sorority recruitment.

The first thing that caught her attention was Alpha Chi Omega’s philanthropy. With a focus on domestic violence awareness, Raef explained it is a taboo topic that is a big problem in society.

“I loved that Alpha Chi was taking that initiative to talk about it in a way to encourage and support women,” she said.

After learning about the sorority working with the Women’s Protective Services in Lubbock, it proved to Raef the dedication and impact she could have on the local community. From there, she described her love on Alpha Chi Omega’s slogan of “real strong women.” Raef emphasized how the sorority focuses on grow- ing, supporting and empowering women.

Once Raef attended Foundation Retreat, a Christ-centered camp for incoming freshman, her counselor was the vice president of standards for another sorority. Raef learned about the responsibilities of helping members on their different walks of life and be with them on a very personal level. As soon as she was in Alpha Chi Omega, Raef became a freshman standards board representative, then moved up to vice president of standards during her sophomore year.

“I got to fulfill my dreams and spend that year doing the position I really wanted to,” Raef said.

Going into her senior year, she was encouraged to run as president. Although she was unsure, Raef ran for
the position and ended up winning. As president, Raef explained she manages the executive board and all functions of their sorority.

“I have gone through so much growth over these past three years here at Texas Tech, and a lot of that is because of Alpha Chi Omega,” Raef said.

With the president already as a campus representative for the chapter, Raef emphasized it was an honor to be nominated by her sorority for Homecoming.

“My entire sorority not only had enough faith in me to elect me as president but also to represent them for the entire campus, as well, for their Homecoming nominee,” she said.

As an initial 40 candidates were announced at the beginning of the week, only 10 were decided at Student Organization Sing based off a bling resume screening. Thursday was the interview process to determine the top five King and Queen nominees, which Raef recounted as extremely intimidating and unforgettable.

“I have gone through medical school interviews, but this interview honestly was more stressful than that,” Raef said with a laugh.

A panel of eight judges decided the top five of each at the Rowdy Raider Rally on Friday. Raef and David Rivero, a member of Beta Theta Pi, which was the Homecoming partner of Alpha Chi Omega, were announced. The fast turn around of voting throughout that day, then the winners were announced as Raef and Rivero during halftime of the football game.

“Homecoming week was honestly the most fun week I’ve had at Texas Tech and also the craziest week,” Raef said.