In this month’s Alumni Spotlight, Campus Live had the chance to sit down with Mayor Dan Pope of Lubbock. Our time together covered several topics ranging from his time as a student at Texas Tech, his career after graduation, learn- ing about his family, and discussing his vision for the future of Lubbock.

“I had a great four and a half years as a student at Texas Tech,” Pope said, “I was a Finance major and hold a degree from the Rawls College of Business.”

“I was pretty active on campus when I was a student at Texas Tech having been an R.A. in the dorms my Sophomore year, I worked for Adolf Coors for a year as their campus rep, delivered office supplies my last year in school, and I was a member of Phi Delta Theta fraternity,” he said.

We asked the mayor of his best memories during his time as a student, and he said, “I have a lot of great memories as a student but I can remember some good memories of Tech basketball and playing in the bubble, and of Bubba Jennings and Vince Taylor and those guys,” he said.

Our next topic shifted focus to his career after graduating from Texas Tech.

“When I le Tech I put that nance degree to work and became a salesman. I went to work for Xerox Corporation and spent ten years there,” he said.

“I actually met my wife while working for Xerox in Nashville, but luckily she was a Texan.”

We learned of the Mayor’s time when he started his own business in town called Benchmark Business Solutions.

“My wife and I moved back to Lubbock in 1994 and started Benchmark Business Solutions, operated that for the better part of twenty years before we sold that business,” he said.

Next, we asked Mayor Pope what we could typically find he and his family doing outside of politics.

“My wife and I love to travel, we all love to snow ski, and you can nd me on the golf course although there’s not as much time for that now as there once was,” he said.

“We enjoy following the Red Raiders and we had a great trip to Boston to support our basketball team.”

e future for Lubbock was our next topic of discussion, and Mayor Pope said, “Lubbock has so many things going for it and we o en don’t do the best job selling ourselves or talking about ourselves,” he said.

“We have all four seasons, we have a great infrastructure and transportation system, the cost of living is great, there are good jobs and lots of entertainment options.”

“ e American dream is alive in well in Lub- bock, Texas, and our doors are open for business,” he said.

In our last question, we asked Mayor Pope what his message would be to current and future alumni of Texas Tech.

“It’s a great place to earn a living, to start a business, and to raise a family, so make sure Lub- bock is on your list.” 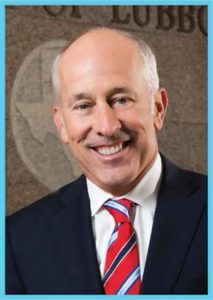